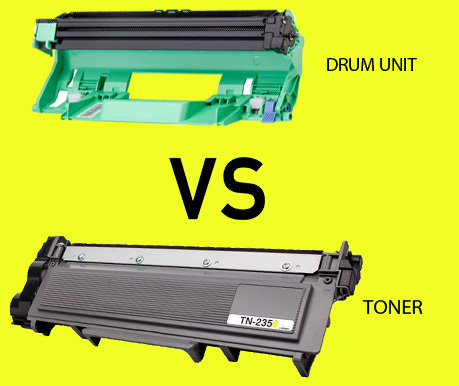 In laser printing, there is often talk of toners and drums. What many people aren’t aware of is that laser printing essentially requires both of these components. It doesn’t, however, seem possible to buy image drums for many printers.

The reason for that is that particularly smaller, more affordable printers are equipped with so-called combi-cartridges. Combi-cartridges consist of both toner and image drum. Every time you change the toner cartridge the image drum is automatically changed as well.

Toner and drum are often confused when customers order replacements.

Toner is what provides the colour in laser printing. Toner is a powder made up of several components such as colour pigment, developing agent, resin and anticaking agents.

The image drum is the unit with which the printer or copier transfers the image onto paper.

Always buy the component that your printer asks for. If your printer isn’t demanding toner or drum, the following rules apply:

Most small laser printers, for example by Canon and HP do not have separate image drums. The drums are a direct component of the toner cartridge.